Academic publishing is a protracted business. As a translator of academic texts, it’s rare for the translation to become available (whether in print or online) soon after its completion; in fact, given publishers’ schedules, it’s more likely that you will have to wait twelve months or more. Add to this the fact that the translation process itself can be equally lengthy – whether because the text you’re translating is very long, or requires lots of research and revision, or both – and you’re looking at a period of several years from start to finish for a project. Of course, it’s all the more exciting when the finished product finally becomes available! 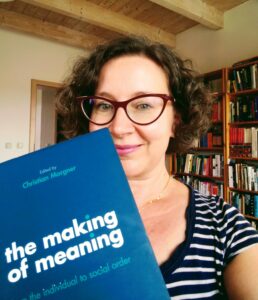 The latest of my translations to appear in print, The Making of Meaning: From the Individual to Social Order, a selection of essays by Niklas Luhmann originally published as part of his multi-volume Gesellschaftsstruktur und Semantik (Social Structure and Semantics), was one of these multi-year projects. I was first contacted about it by the cultural sociologist and Luhmann expert Christian Morgner in January 2017 – he had spotted a call by the Holcombe Academic Translation Trust inviting tenders to be submitted for the translation of some hitherto untranslated works by the famous (or infamous) German social theorist Luhmann. The Trust would make a substantial contribution to the cost of the translation conditional on a publisher being found to publish it. Christian and I decided to submit a joint tender for the translation of one volume of Gesellschaftsstruktur und Semantik, and ended up winning the award! The next step was to negotiate with the publishers. Oxford University Press showed an interest, suggesting that we work on a selection of essays from the different volumes of Gesellschaftsstruktur rather than one volume. Luhmann’s German publishers, Suhrkamp, agreed on the condition that the trustees of the Luhmann estate would vet the translation of the first essay to ensure the translation measured up to their standards. By the time Christian and I started working on the actual translation, it was mid-2018.

To ensure that I fully understood all the nuances of Luhmann’s work, Christian and I would meet up around once a week to read through the text – we would usually manage about ten pages per session – and discuss its meaning paragraph by paragraph, sometimes even sentence by sentence. I would then go home and make a first translation of the pages discussed, send them to Christian for him to review, and we would go through the text again together during a second session. The revised draft was then shared with Michael King of the Holcombe Translation Trust, another Luhmann expert who had agreed to read through and comment upon our translation. Christian and I would go through Michael’s feedback, then both he and I would have separate discussions with Michael, with Christian concentrating on questions relating to social theory and I on linguistic issues. As you can imagine, this process was extremely time-consuming – it was not until 2021 that we felt a “final” version of all five essays had been produced. 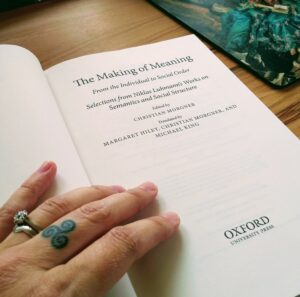 For me, translating Luhmann was like a bit like academic translation on steroids – all the challenges usually encountered in academic translation were present, and to an extreme degree! For one, the highly dense (some might say impenetrable) prose, swimming in nominalisations and multi-clause sentences – DE>EN translators are often told to produce a target text that “sounds as if it had been written in English”, but what if the original German text sounds nothing like normal German? For another, the use of highly specific terminology, in Luhmann’s case both his own and that of the field under discussion in the respective essay. Then, the referencing and quoting of other writers, from Aristotle, French and Italian theorists of the 17th and 18th century, Schiller and Hegel to Marx and beyond, requiring me to read through the original texts and locate extant English translations or make my own translations if necessary. The problem of grammatical gender raised its head, too – in the longest essay, “Individual, Individuality, Individualism”, a sweeping 80-page account of the development of these concepts, it was a real struggle to adequately render the German term “das Individuum”, which Luhmann uses to refer both to the individual as a concept and to individual people. In the end, we opted to use inverted commas to indicate when the concept of ‘the individual’ was meant, and, correspondingly, used the pronoun “it” for the concept and “he/she/they” for individual people. This wasn’t exactly pretty, but without it, it would be all-too easy for English-speaking readers to simply assume that Luhmann was writing about actual people rather than a conceptual construct. Then there was the additional challenge that Luhmann very consistently used the word “der/die Einzelne” when referring to individual people before the concept of individuality arose. Of course, in English we use “individual” for “einzeln” too (as in the previous sentence) – it isn’t possible to substitute the literal translation “single”, as this bears the connotation of a person who is not in a (romantic) relationship (“single person”). This was a case of the translation inevitably being less precise than the original due to the constraints of the target language, and the best we could do was add a translators’ note drawing readers’ attention to the issue. I could go on at great length about all the other challenges encountered, but that would probably result in an essay as long as “Individual, Individuality, Individualism”!

Luckily, the things that make academic translation so rewarding were also magnified in this project. My above reference to the huge amount of time required to produce the translation could be interpreted as a challenge; in actual fact, though, I love being able to get really deeply into a subject or topic, and the opportunity to spend several years working on as astonishing a thinker as Luhmann was a real privilege. Luhmann’s theory is so different from any other kind of social theory and entails such a novel way of looking at the world – I often found myself saying to Christian: “How on earth was he able to come up with this?!” Exploring concepts such as civilisation, culture, honour, ennui, memory and class through the lens of Luhmann’s theory was often eye-opening. The ability to delve into every nuance of the text with two other experts was another major perk of the job. All in all, it was a hugely enriching experience, and even though no doubt not everyone will agree with every one of our solutions, I’m really proud of the finished product.

What do you call twenty nerds in a castle? An academic translation workshop!

So long, and thanks for all the fish (and chips) – on leaving the UK

It’s been a bit quiet here on the blog, but for a very good reason…