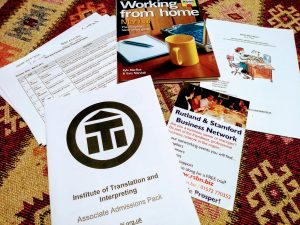 I’ve been doing some major decluttering around our house, and in my office in particular. It’s amazing how much “silt” can build up in one’s desk, cupboards, and shelves! I’m no devotee of minimalism, but there is something very liberating about throwing out old stuff one no longer needs. Decluttering also helps to uncover old treasures. When I turned my attention to a set of shelves in the back corner of my office (difficult to access because they were blocked by a large, framed picture that we hadn’t had the space to hang – a major Feng Shui crime, I’m sure), I discovered a whole range of documents dating back to my first years of self-employment a decade ago. What a delight it was to look back through them, to relive the excitement and trepidation of my first steps into the world of freelance translation, all with the knowledge that my venture had indeed been a successful one! In particular, I found:

What looking through these files really brought home to me was how, during these first stages of my self-employment journey, I had been held by a big support network. Leaving a steady paycheck and striking out on my own was scary, but every step of the way I had the help of friends and family, translator colleagues, fellow entrepreneurs, and even the government. Ten years on, I am able to look back with a great feeling of gratitude. As Sandra Day O’Connor (the first woman appointed to the US Supreme Court) wrote, “We don’t accomplish anything in this world alone.”

Why is a good editor like a Victorinox Swiss card?

This Christmas, I was sent a present by one of my clients in Switzerland –…

It’s the beginning of a new calendar year, and I always like to start January…

In late 2019, I was feeling…frustrated. I had been running my own freelance translation business…